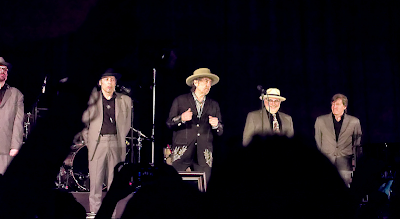 
Never enough Bob. There I was last Friday night, snooping around Expecting Rain, the premier Bob Dylan website, checking out the live setlist from Buffalo NY for opening night of the 2013 edition of the Neverending Tour, where the fanatics post up for the rest of us too busy to be at every show, live, play by play, song by song, reportage. What he's wearing. What part of the stage Bob's standing at for each song. When he's playing harmonica. When he's playing guitar? Plus the occasional Instagram nugget for illustration. But most importanly, you can find out in the moment, what songs Bob is adding and subtracting each night. It's taken for granted that no two nights are ever alike - Dylan's known for changing songs up mid show, calling an audible on his own band at a moment's notice. Bob fanatics like myself live for the obscure add-in's. Meanwhile over at DylanPool - on the theNeverendingPool website, the faithful  are betting on upcoming setlists, getting odds each night on the outside chance he'll add a rarely played song worth more points in the nightly competition. It's online scrabble for Dylan-onics.

So there I was last Friday night watching the live setlist streaming in from SUNY Buffalo. It was an extraordinary setlist for a first night. New opening song -  Things Have Changed. Four - count 'em - four songs from Tempest.  And some great classics, any fan would die to see just one of on any given night - Visions of Johanna, Blind Willie McTell, Highwater, What Good Am I?  Plus he changed up the last four songs of the set - that he was pretty much on automatic pilot playing for the last year. And he's changed up lead guitarists for this tour - adding Duke Robillard.  Well that was enough for me. I was going to be up in Massachusetts anyway, nearby the third stop of the tour last Monday in Kingston, Rhode Island, so I pulled the trigger and picked myself up a last minute ticket.

I love seeing Dylan shows on college campuses. They are so accessible. So not city like. I drove up to Connecticut in the early 90's to see Dylan and Patti Smith play a college gymnasium - sat right on the floor. Also saw him with then unknown opening act Jewel at a college gym out in New Jersey in the mid 90's. The atmosphere is just so laid back and Dylan does some of his best shows out of town. So there I was Sunday heading for a college stadium at University of Rhode Island on a pleasant night in April. No annoying city bouncers - just local students in charge. I just walked to my floor seat and sat myself down. I had a great spot where I could see Bob and the band pretty well. Plenty of leg room. I was even on Dylan's side of his piano, where he spends much of the set these days. 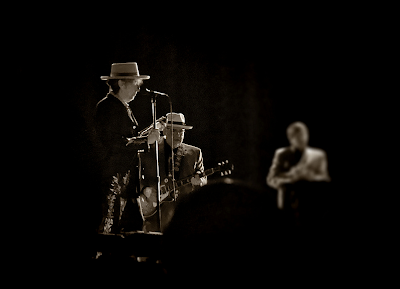 
Now I don't plan to give a full rundown of the show I saw. In fact as it turned out, I saw virtually the same setlist in Kingston, as was played in Buffalo. Inscrutably Dylan has played nearly the same set list for the last five nights running - confounding the faithful.  But it's such a great setlist that nobody's complaining - that's for sure.

Just a few things - I love that the opener is "Things Have Changed" -  as in the setlist has really changed since the last tour, OR as in, nothing's gonna change from night to night. Dylan came shuffling out to center stage with a "take this" attitude right from the start. He looked great all in black, embodying a kind of Charlie Chaplin look gesturing and pointing his way thru the song. Stepping back during the guitar break, left hand on hip, head cocked back, listening to new guitarist Duke Robillard get acclimated. The whole set list, in fact, felt like a bit of a rehearsal to acquaint the "new guy" with the lay of the land. Considering his history with Roomful of Blues and the Fabulous Thunderbirds, the setlist is perfectly tailored for a blues guitarist. Beyond Here Lies Nothing and Thunder On The Mountain, and Early Roman Kings are all right in his comfort zone. And sprinkled throughout the sublimely constructed setlist, were a couple of 60's classics (Thin Man, Visions, Watchtower), one 70's highlight (Tangled), some cherry picked standouts from recent records (Beyond, Thunder), two show stoppers (Willie McTell and Highwater) , two total surprises (What Good Am I?  and Lovesick), and four solid songs from the newest CD Tempest.  Did I say I love this set list?

You can listen to the whole Amherst show here for yourself:   Amherst full show audio 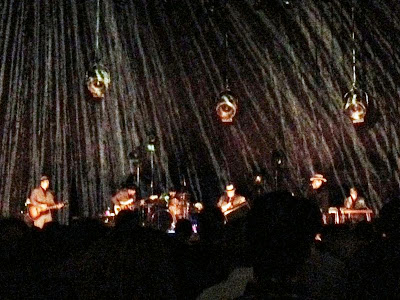 I've been re-reading "Performing Artist "all week, the masterwork from the great Paul Williams who sadly passed away a few weeks ago. I was reminded that Dylan used to have an unchanging set list back when touring with his first electric band in the 1966. I love Williams' description of the rhyme scheme in Visions of Johanna, from his review of Blonde on Blonde  back in 1966:

"straightforward through four verses AAA BBBB CC - with dramatic crescendo in the last verse,  AAA BBBBBBB CC (all of those B's  give the last pair of C's s special resonance."

So I've been listening to varying versions of that song all week. In fact, every time I see a live version of Johanna,  the key for me is how much attention Dylan pays to that spectacular last verse. I get anxiety sometimes during the last instrumental break prior, waiting to see if he's gonna bring it on home. Sometimes he lets it slide, sometimes he's right on top of it. In Kingston, he was absolutely on it - from the "peddler" and the  "countess", to Louise, straight through the "skeleton keys in the rain". There's a reason this key song was right in the middle of this set list - in a version recognizable to all (unlike most of the other songs).  Outside after the show a young student fan remarked to me - "wasn't that a great Visions of Johanna?"

In fact the whole show had a well constructed arc, from the openers center stage, thru the middle ground on the piano, with a stop upfront center for "Blind Willie Mc Tell", landing at the finish line for "Scarlet Town", "Watchtower, and "Thin Man".  My favorite moment: Dylan leaning on his elbow over his piano, head in hand - not playing, but watching and encouraging Duke Robillard as he played away during the break in "Thunder on the Mountain".

Someone posted a clip of the spectacular "Watchtower" from Kingston, where you can hear Dylan adding what I thought at the time was a "oooweee" at the end of the second verse ("the hour is getting late"), and a "ooooo" in the third verse ("the wind began to howl").

You can bet I'll be watching the setlist tonight.