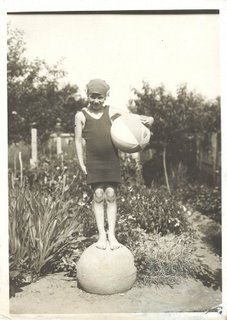 Summertime and the living is easy. Here's another old photo I found at a flea market many years ago for 25 cents (still written on the back in pencil). Back when 25 cents was really worth something - before a dollar was the new quarter.

Anyway, check this one out. Another one I stare at endlessly. Never ending, like a moebius strip - the two balls and the kid in perfect balance. And look at those knees. She (he?) is carrying a beach ball, but standing on what - another ball, a stone, a World War I mine? That great bathing suit, the joker-like bathing cap, the toes. Taken on a bright sunny day, the focus drops off with the brush in the background, where there seems to be a body of water - maybe even a pool? And to top it off, literally, the uneven black border from the negative's edge. 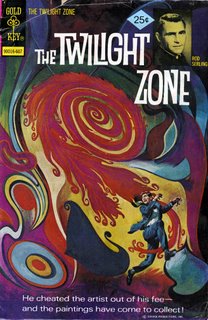 As a Twilight Zone fan who is quite often on the "short list" of those who would love to use my work, but are "on a tight budget", this is the ultimate fanatsy. Getting ripped off is the name of the game in the art world. Either they're using you by paying you nothing, or you're successfully using them by charging high prices for all the years you've been cheated.

So whoever drew this comic knew exactly what they were delivering. Check it out: 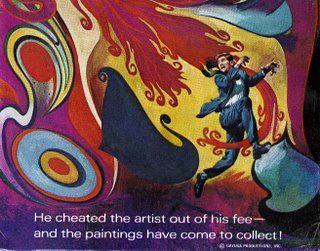 It would be so great if the people in my photos could help me collect. Like the sideshow performers at the end of Tod Browning's Freaks, turning she who rips off the midget into a chicken lady. Now that's Artistic License.
Posted by GODLIS at 7/26/2006 1 comment:

out of the past 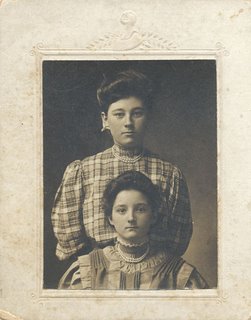 Speaking of Diane Arbus, she said "A photograph is a secret about a secret. The more it tells you the less you know." Here is a perfect example - a small old portrait photograph I found at a Flea Market last year, and it's haunted me ever since. What is it about this discarded view of the past that give me such pleasure? I stare at these two women I don't even know and they stare back at me - endlessly.

Fur What it's Worth - the Diane Arbus movie 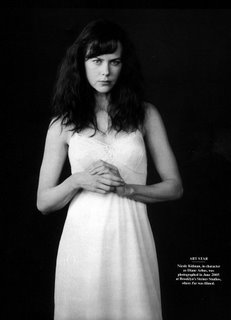 I was just wondering what was up with this project. Last summer, there were pix in the Daily News and the NY Post of Nicole Kidman spotted around town dressing down as Diane Arbus for the long awaited & feared (well, by photographers anyway) Hollywood biopic. This may be small potatoes for most of the world. But for photographers it's a big deal - Citizen Kane meets the Decisive Moment. Now, according to a big story in this month's Vanity Fair (photo above by Mary Ellen Mark) it will be coming to a screen near you this November. Well, one can only hope for the best. It has Robert Downey Jr. as...her neighbor??? 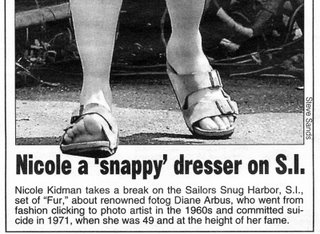 Arbus died in the summer of 1971. Within 2 years - an amazingly quick turnaround - she had a monster major retrospective at the Museum of Modern Art, and an accompanying monograph catalog - perhaps the greatest photo book ever. I was one of those standing on a very long line to see the pix at MOMA in 1973. Their influence on the world of photography can not be understated. Every photographer post 1967 owes her a debt. And I believe that the effect of these photographs on New York City in 1972-73 greatly influenced both the NY Dolls and the soon to be created punk scene at CBGB's. Transvestites, midgets, freaks - gabba gabba we accept you. Arbus, like the Ramones was a big fan of the Todd Browning movie.

So hang on to your cameras, and hope for the best, while I shutter at the thought of Nicole shooting a Jewish Giant at Home With His Parents in the Bronx. 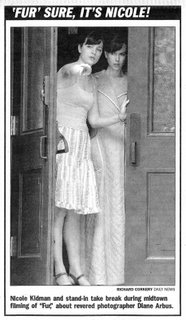 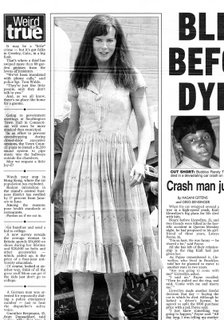