don't judge a book by it's cover

Go see this new animated film Persepolis - you probably won't be drawn in by the title - unless you're a fan of the "graphic novel" by Majane Satrapi, who by the way directed this film. It was the closing night film at this year's New York Film Festival, which is a big deal - that's Marjane and her co-director Vincent Parannoud in the photo below on opening night. The picture above from the film is Marjane as a kid trying to go out and buy rock music illegally on the streets of Iran -and I don't mean RIAA "don't steal music" illegally - this is post-revolutionary Iran. Funniest scene is Marjane doing kung fu to her illegal copy of "Eye of the Tiger". This is a humorous coming of age movie about a kid in the middle of a historic political mess. The voices are done by Catherine Deneuve and her daughter Chiara Mastroianni (her father was Marcello). And word is that Iggy Pop was going to do the english dubbing for the DVD release. Catch it on the big screen where you can really see it - Persepolis. 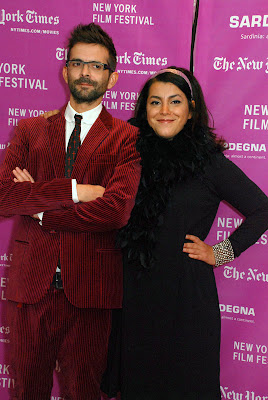