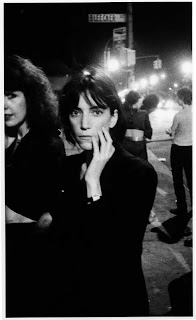 ok so you've had yourself a merry little xmas, but you're not really ready for a rockin' new years eve.
well i haven't been going out on new years eve for many a year. but on december 30th - that's when I venture out to celebrate the end of the old year down at NY's Bowery Ballroom.
It's Patti Smith's birthday show - the second night of her annual 3 night new years' run. Tickets are hard to get these days. Once upon a time I used to wander down to the Mercury Lounge in early december to get my ticket without ticketmonger fees. But you gotta be on top of things early these days, as these 3 nights are the best shows in town - and word's gotten around.  Last year I had to go on craig's list to get myself a ticket.

So if you've got a ticket - i'll see you there. And if you don't, mark it down in your calendar now for next year. Nothing goes on forever.
In the meantime, you can spend her birthday watching the recent documentary she and Steven Sebring made - Dream of Life -  which will be showing on PBS that night.

read about it in the NY Times here:   ny times

But there's really nothing like seeing Patti Smith do a live show. So here's a little xmas present for you: her encore from last year's birthday show - doing the Four Tops "Reach Out - I'll be There".  I can't wait to see what's coming this end of the decade year.

xmas leftovers - blasts from the past 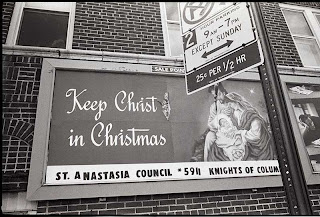 and here we go again. another year and another xmas picture. Every year - shooting and picking another new gem. But this year, I'm taking some time off to find some old gems from the archives. Some vintage black and white pix shot on my good old Leica. Yeah - a nice relaxing xmas eve thumbing through my negatives, while everyone else frets about wrapping their presents.

My presents this year are my past... 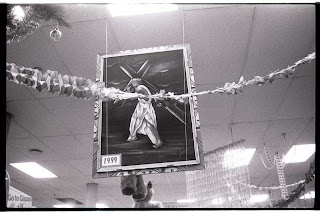 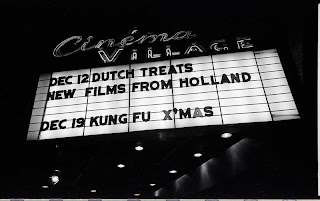 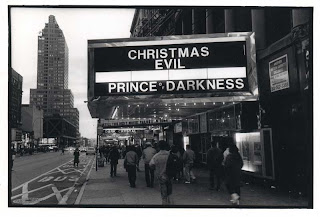 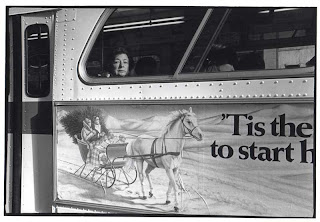 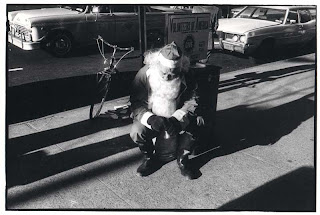 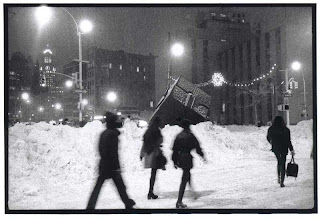 "but I heard him exclaim,

ere he drove out of sight,

merry christmas to all,

and to all... a gezundtheit"

So Un-American: End of the Innocence 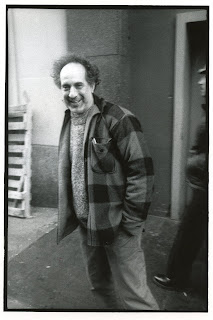 OK - more Robert Frank. Now this is interesting. Many years ago in 1989, ex-voice of the Eagles, Don Henley had a big hit on MTV with his song 'End of the Innocence'. While watching the video late one night, thinking something looked all too familiar, I taped it and re-watched it closely. It didn't take too long to separate the video from the noxious music, and realize that the whole thing was totally based on images from The Americans. I can imagine someone handing a copy of the book to the director, saying remake these photographs as a video - and by the way, do it in black and white. Of course there was no credit to Robert Frank. Not even a nod to the original source material, by way of perhaps someone carrying around a copy of the book itself. Leading me to wonder about who cleared what with whom. I couldn't really imagine that Robert Frank would allow Don Henley to remake his masterpiece into a rock video to sell records on MTV. Especially given what had happened between him and the Rolling Stones over Cocksucker Blues. Something didn't seem right. I eventually had the opportunity to ask Robert Frank about whether he ok'd the usage, and the answer was no. That it was in the hands of the lawyers. This was back in 1989 or 1990.
So I present here the Don Henley video. And a clip I compiled with Robert Frank's photographs from The Americans, and they're re-appearance in the video. I'm sure there are even more than I've pointed out. Check 'em out yourself. The audio I've laid underneath it is of Robert Frank speaking at the National Gallery of Art in Washington D.C. last year with the exhibition's curator Sarah Greenough. It's a fabulous interview and you can listen to the whole piece here:
http://www.nga.gov/exhibitions/frankinfo.shtm
Oh, one more thing. I've recently found out that this video was made by David Fincher, director of Fight Club and Zodiac. I've got to think about that one...
Robert Frank pix vs. Henley video:
all photographs © Robert Frank - video © someone
Posted by GODLIS at 12/16/2009 2 comments: 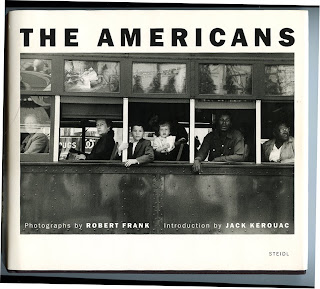 So speaking of Robert Frank, there is a must see exhibition of all the prints from his photographic masterpiece "The Americans" at the Metropolitan Museum here in NYC . If you haven't been there yet, you only have a few weeks to catch the subway uptown to see it, because the show is closing on January 3rd - and you know that's coming up fast. You better not miss this one!
I drove myself down to Washington D.C. last year when this exhibition appropriately debuted at the National Gallery of Art. Robert Frank himself drove all over the country to take these infamous photographs in 1956. And his little book The Americans changed the whole game of photography. In 1956, there was Elvis, and there was Robert Frank. That's all you need to know.
At the time, Robert Frank was exorcised for taking out of focus, grainy, tilted ugly photographs. What he was in fact doing, was breaking the rules and changing the whole concept of what a photograph was. While Elvis was doing the same thing with "That's Alright Mama at Sun Studios, Robert Frank, as Jack Kerouac says in the intro to The Americans, "sucked a sad poem right out of America onto film".
There is an immense catalog of the exhibition compiled by curator Sarah Greenough, which includes the contact sheets from every photograph (be sure to get the hardcover edition!). It is almost encyclopedic in it's coverage of the little LP of a book that The Americans is - 83 photographs that tell the compact story of America in 1956. Tell someone you love that this is what you want for Chanukah. 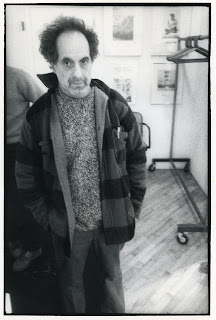 the darkroom of his mind 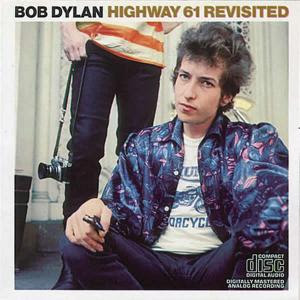 There's a line on Bob Dylan's 2001 CD 'Love & Theft' - it kind of sneaks right up on you - "Big Joe Turner looking east and west from the darkroom of his mind." It's a photography reference sure enough - right there at the opening of the song 'Highwater (for Charlie Patton)'.

What's up with Bob Dylan and photography? Just recently he's put out 2 CD's with photography illustrated covers. Not pictures of himself. Just cool photographs picked out by himself? When the CD 'Modern Times', came out in 2006 - I immediately recognized the cover photo. A beautiful black and white shot by Ted Croner - 'Taxi, New York at Night, 1947' - which I had seen, and ogled over, many times at the Museum of Modern Art. And on this year's CD 'Together Through Life' there is a cover photograph from Bruce Davidson's 1959 teenage gang essay, and a back cover photograph from Josef Koudelka's book on Gypsies. Both great black & white photographers themselves. Now I also happen to know that there was almost a photograph by Andre Kertesz on the cover of his recent book 'Chronicles'. So there's obviously something happening here.

Bob Dylan's always been involved with the photographers that shoot his covers. There are the great middle sixties shots done by Daniel Kramer (Bringing It All Back Home, Highway 61 Revisited), Jerry Schatzberg (Blonde on Blonde), and Barry Feinstein (Times They Are a Changin' + the No Direction Home DVD). All are collaborations with the photographer. The dangling camera on the cover of Highway 61 - truly a visual non-sequitor - is in itself a nod to the presence of the photographer, prominently placed within the portrait of the artist as a young motorcycle rider. And recently it's been revealed by Schatzberg that it was Dylan's decision to use the slightly out of focus shot for the cover of Blonde on Blonde.

What I find truly interesting, is that Bob Dylan goes not just to great musicians to record his music, but he goes to great photographers to capture his image. Most recently, the cover portrait of 'Tell Tale Signs' last year, was shot by William Claxton - noted for his fashion and jazz photography. While the inner sleeve of 'Love and Theft' has a portrait by David Gahr - he had shot Dylan as far back as the village and Newport Folk Festival days. And these many years later in 2007, known to be in ill health, Dylan seeks him out to shoot his portrait. Both David Gahr and William Claxton died in 2008.

One last storyline here, about photographer/musician/filmmaker John Cohen, who is name-checked in the liner notes for Highway 61 Revisited:

"You are right john cohen, quazimodo was right...there is no eye...i cannot say the word eye anymore...your rooftop - if you don't already know - has been demolished."

It was John Cohen who shot the first film footage of a pre-signed Bob Dylan on his 3rd Avenue rooftop - you can see it in the Scorsese doc 'No Direction Home'. John Cohen, by the way, shot stills on the set of the Robert Frank/Jack Kerouac film 'Pull My Daisy'. Cohen and Frank were neighbors on lower Third Avenue, when Dylan dropped by there in 1961. And many years later, in 1970, the very reclusive Bob Dylan would call in John Cohen again to shoot pictures on his very own MacDougal street rooftop for the LP 'Self-Portrait'. Dylan doesn't live there anymore, and John Cohen's 3rd Avenue loft was indeed demolished to make way for a building that Joey Ramone would eventually live in.

The last lines of the Highway 61 Revisited liner notes are to John Cohen: "you are lucky - you don't have to think about such things as eye & rooftops & quazimodo". 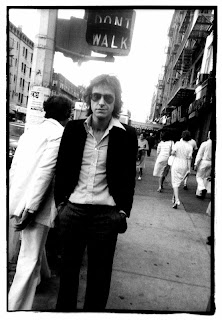 Ray Davies, NYC 1977
Have you heard the Kinks song "there's too much on my mind"? Well it seems I've been keeping it all well hidden lately. I'm all photography all the time. But lately I think I've got myself a case of the "Not talking enough photography blues". Been neglecting my duties. Taking too much time off. Now I'm back with a vengeance.
Speaking of the Kinks, have you heard their song "Picture Book"? I love that one. It didn't even bother me to see it in an HP advert a few years back - that song deserved the big replay. But how did HP not follow it up with "People Take Pictures of Each Other" (...just to prove that they really existed!) from the same great LP Village Green Preservation Society?? Ray Davies - he should really be doing the Nikon ads instead of Ashton Kutcher.
And then there's my other crazy photo centric favorite Bob Dylan. "Big Joe Turner looking east and west from the darkroom of his mind". I've got way too much to say about Dylan and photography, so I'm going to save that for the next post.
In the meantime, I've included the photo I took of Mr. Ray Davies on August 16, 1977, on the upper west side of New York City, the day Elvis Presley died. There was definitely too much on all our minds that day.
Posted by GODLIS at 11/21/2009 No comments: