Crzay Day in the Bob Dylan world. Fabulous new record "Tempest" being streamed free on iTunes as I write this. First listen to the 45 verse/no chorus epic song about the sinking of the "Titanic". Tribute song "Roll on John" about John Lennon. It doesn't get much better than this. AND I SAW HIM LIVE Sunday night! Wow!  Here's my review of the show... 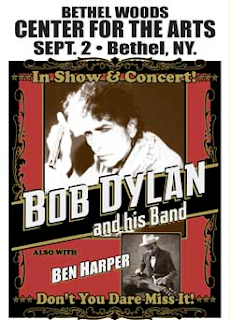 I wasn’t even going to bother to contribute a review of this Bethel NY show to the online Bob Dylan community. On this lazy summer night, I was perched  almost too comfortably uphill from the stage in my $30 lawn seat. From that distance I couldn’t really attest to anything specific that was going on onstage - what Bob & the band were wearing or who was playing what instrument type was beyond my point of view. Usually I’m up close & personal, but no notebook in hand tonight, I was ready for just a summer dose of Bob. But jeez, I’ve waited 48 hours now for someone to post a review, and nothing was delivered. So…somebody’s got to reach for the rising star, and I guess it must be Up to Me.

It couldn’t have been a more perfect end of summer September night in Bethel NY. Full moon rising over the hills as Bob Dylan and his band took the stage shortly around 9:15. Talk around the Bethel Woods site had been about what tracks from Tempest anyone had already heard, and whether he was going to open with Leopard Skin or River Flow, which he’d changed up the night before, and whether he was going to play guitar much. But really it was a very, almost too very laid back crowd. Lot of wandering tie-die types. Some were mathematicians and some were carpenters wives to be sure, but there seemed to be no real sense of urgency to this crowd. Well hey I hadn’t seen Dylan since that outdoor Brooklyn show a few years ago. Hadn’t seen the current state of this touring band in a while, so I guess I can offer a fresh perspective.  Bob was about to come onstage and I was ready for a lethal dose.

First things first, the sound at Bethel Woods was impeccable. Ben Harper had gone on for an hour with just an acoustic guitar and you could hear each string perfectly.
These people had their sound system installed like a charm, even from where I was sitting up on the hill. So when Bob came out and began with – River Flow – yes! - I could pick right through any gruffness in his voice and hear every word. The main thing I can say about this performance is that he was “spot on” all the way through the show. No flubs, no slow spots, no lazy verses. He got every word of every song near as I could tell (yes I heard the improvised Tangled verse). And he wasn’t rushing anything (maybe because he had the next night off before Portchester).  It was a great long set with a lot  of my “wish for” songs on the set list.

Right away we got an excellent “Baby Blue” in the # 2 slot. My 19 year old daughter nodded & smiled to me when she recognized it. I’d been following the live set lists and  boblinks, so I knew where the changes would be, and tonight they were almost all pleasant surprises. I hadn’t heard these new versions of “Things Have Changed” or the decidedly non-acoustic “Tangled”, or Dylan’s grand piano style, so it was all fun & new. And then came the #5 slot – “Levee”. My daughter said “from Modern Times” and she & my wife boogied in their seats.

But the real killer moment was upon us – “Blind Willie McTell”. Bob center stage with harmonica doesn’t really describe it, because this was the moment you come to these shows for. Stepped up a notch, singing every verse in the moment, and topping it off with great harmonica. Literally reaching out to the audience. Took my breath away.  Talk about “arrow on the doorpost”.

At this point the train was out of the station. “Tweedle Dee”  was one that I was hoping for, having listened to Love & Theft all summer. Lots of that grand piano with Bob jumping out of his seat as the song ended. “Trying to Get to Heaven” was unexpected and had more harp. I don’t know, but there was a lot of harmonica tonight straight thru and all of it good. As he slipped into “Highwater” my daughter remarked on the “hurricane season” set list, and yes more harmonica. And then as we approached the 10 slot I sat silently hoping for “Visions” to stay in the set list one more night. And yes! He did one of the clearest versions I’ve heard him do live – all the verses except “little boy lost” and all the words of all those verses, as I said earlier “spot on”. Right down to the “fish truck that loads as my conscience explodes”.

Now with “Highway 61” we were in the final stretch. This band tends to be a bit layered and jazzy and I was ready for a bit more rock & roll.  So I was ready for the Highway – Thunder – Rolling Stone - Watchtower part of the set. And here let me just say that my only disappointment with the show was the audience. Did they not get that they were listening to Bob Dylan playing his most amazing songs? The three of us sat there wondering if we were watching the same show as everyone else. People even seemed to have a hard time even putting their hands together to clap. At least the geriatric mosh pit, as my wife called it, was standing. But I gotta say, Dylan was in his own world on that stage and drove the whole enterprise ahead without a care.

And then came “Rolling Stone” – all four verses. Has he been doing that too lately? Last few times I saw him he was leaving oui the “jugglers & the clowns” verse and only doing “miss lonely”. But all four were there tonight. And let me just say this about the chorus – my kid looked at me after the first chorus and said asked if he just said  “How Does it Feel to be Without a Phone?”  I can’t attest to anything there, but it sure sounded funny and not out of the realm of possibility at the moment. Ha!

Oh I left out my one disappointment – “Spirit on the Water’ is not my favorite track and I was hoping for “Simple Twist of Fate”.  But I gotta say this was a credible, not lazy,  version and we got more harmonica. So I’ll let that slip. This is why we keep coming back, because you can’t always get what you want. It’s Bobs show and he’s  the phantom engineer on this train.

Well if you watch these set lists you know how it all ends. “Watchtower” and “Blowin in the Wind”. And again, I’ll say this was not a rushed show. I imagine Dylan coulda been heading for the tour bus while the band played the song off. I’ve seen that before. But nope. There he was again,  jumping up from the piano and heading upstage to play us some more splendid harmonica right up to the bitter end, taking in the applause.. And then, just like that, it was time to get outa this all night café. We found our car, and I played the original “Willie Mc Tell” for my daughter – “wow that sounds so different” – and we bugged outa there.
Posted by GODLIS at 9/04/2012 2 comments: