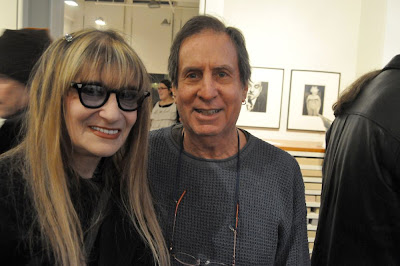 Marcia Resnick and Danny Fields
Let me start by saying that Marcia Resnick - who has a really sweet heart and a great eye - is one of my favorite New York City photographers.  She's been looking at and shooting Bad Boys in New York City for decades. And as Johnny Thunders said - "All the smart boys know why". That was in "You Can't Put Your Arms Around a Memory". But actually, if you buy one of Marcia's prints on view at Deborah Bell Gallery, you can.
The first thing I thought about after leaving the exhibition, "Bad Boys" last Thursday night was -"Damn, I should have taken more pictures tonight." I was having such a good time looking at the photographs and talking to everybody - and what a startling group of everybody's it was - that I forgot to remember that I wanted to try out this new app on my phone, uh camera - the one that makes all the photos look like they were taken inside a 1950's photo booth.
Marcia Resnick

Well, that's how we photographers are. First we stare in wonder at that great picture on the wall, then we get jealous, then we get inspired, then we shoot. And there was a lot at Marcia's exhibition to get inspired by. A lot!  People slipped in and out like they do at these events - some to see if they made the final cut onto the wall.  And others stayed all night to take it all in - like me. Flashes were going off all around, so why didn't it occur to me sooner to pull out my phone and shoot? I've got to admit, it's still a little difficult for someone who calls himself a photographer to get those words out of his mouth. Unless I'm using a weird app - like Hipstamatic, and in this case Pocketbooth - something that alters the phone picture taking experience significantly.   Well I got started shooting too late - born to lose - but here's a few of my shots from Marcia's fabulous opening. You should have been there!
Oh wait - one more thing. Did you know that Marcia Resnick and Senator Chuck Schumer went to the same High School? Not only that - they were  #1 and #2 in their class! Think about that one.
Anton Perich 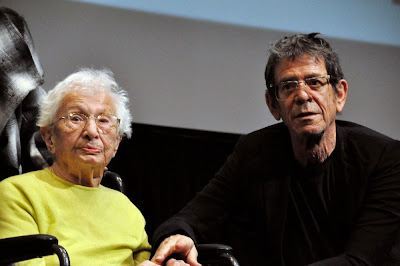 Lou Reed with cousin Shirley at screening of his film Red Shirley
"Here she comes, you better watch your step"
Red Shirley, the 100 year old Chelsea girl activist,  cousin,  and subject of director Lou Reed's new film of the same name, was onstage with him for a unique post-screening Q&A at the Walter Reade Theater at Lincoln Center this past Friday Night. The former kingpin of the Velvet Underground turned filmmaker, came uptown as part of this year's Jewish Film Festival. 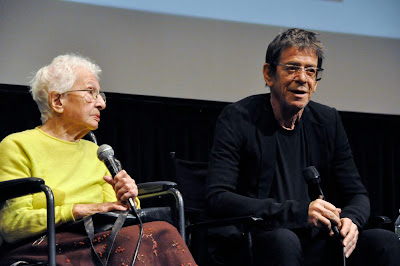 "See the way she walks, here the way she talks"
Literally a "factory girl", Reed's cousin who worked for 47 years as a seamstress in New York City's garment district was called "Red Shirley" by her fellow workers for standing up to the bosses and the unions alike. This 40 minute documentary, a short and concise interview, was filmed by Lou Reed and the phenomenal photographer Ralph Gibson at cousin Shirley's Chelsea apartment. Shot on a Canon 5D Camera in both black & white and color, the film is really a joy to watch. 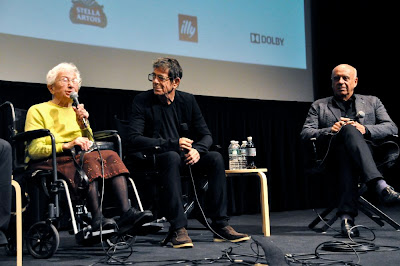 Shirley, Lou Reed, and Ralph Gibson at the post screening Q&A
As we listen to Reed coax Shirley to tell the story of how she left her small town and family in Eastern Europe behind - Reed lovingly forces her to pronounce the town's difficult name at least 3 times -  Gibson's camera glides around the apartment lyrically landing on artwork, photographs,  and artifacts collected over an extraordinary lifetime (we found out at the Q&A that the photographs were unearthed by Reed and Gibson from the bottom of a closet - "what's under those clothes? photographs!").  During the course of the film, Reed finds out for the first time that cousin Shirley played mandolin, and carried it with her two suitcases on the final trip from Montreal to America ("I didn't like it there. It wasn't cosmopolitan enough."). These are the kind of stories a scriptwriter couldn't make up. 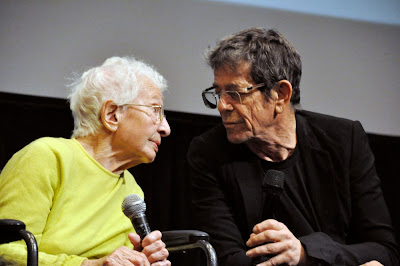 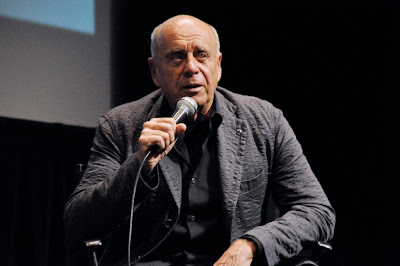 Ralph Gibson
These two seasoned artists seemed to have been left stunned while making this film, by this feisty activists' raw power. Asked during the Q&A whether she was a feminist, Shirley answered "no." A unionist? - "No." An activist - "Yes!" At Lincoln Center Friday, watching Lou Reed let Red Shirley take over the stage and the room with chutzpah, a wheelchair, and a microphone was a beautiful thing. 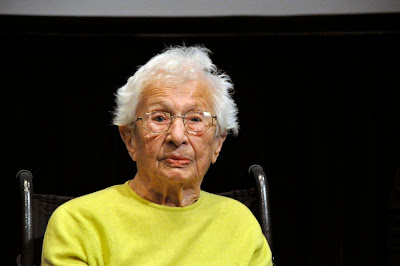 Red Shirley
Where will you see this beautiful little film? Well you can marvel at a clip from it here, on Lou Reed's website.
I'll be your mirror indeed. Bravo! 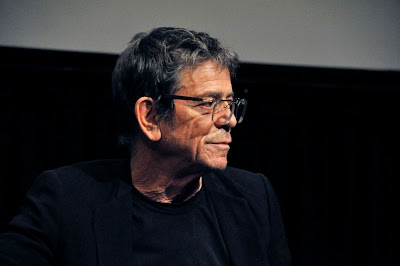