Rendez-Deja-Vous / A Tale of 2 Photographs 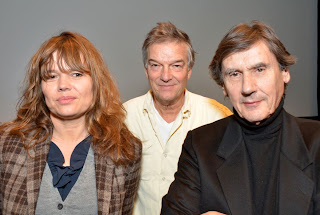 French Director Benoit Jacquot (center) with his two producers
Last weekend I found myself back at Rendezvous with French Cinema, the annual festival of new French films at Lincoln Center, where I saw the delightfully historical Farewell, My Queen directed by Benoit Jacquot. I'll spare you a review, in exchange for a recommendation. Suffice to say it is about the last days of Marie Antoinette. But I must say I had a surprisingly fun time taking this picture of the director with his two producers. Unusually light hearted - both onstage after his Q&A, and in his direction of the film itself - Benoit Jacquot set up this decidedly fashionable photographic composition for me. Merci! 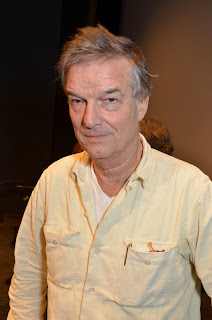 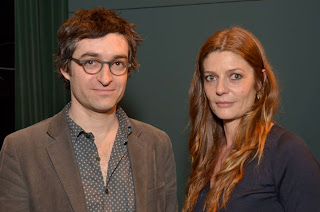 Mathieu Demy and Chiara Mastroianni
I get dizzy just thinking about all the levels of cinema legacy involved in this photograph I took on Saturday. Let me try to explain. Chiara Mastroianni is the daughter of legendary actors Catherine Deneuve and Marcello Mastroianni. She stars in Mathieu Demy's new film Americano. Mathieu Demy is the actor/director son of French New Wave directors Jacques Demy (Umbrellas of Cherbourg) and Agnes Varda (Cleo From 5 to 7). He stars in and directed the film Americano. The film also stars Geraldine Chaplin, daughter of Charlie Chaplin - got it all straight?
Ameriano, basically a film about a mother-son relationship, includes footage shot of Mathieu Demy as a kid in the 1970's, by his real mother Agnes Varda. And the girl he pursues throughout the film, played by Salma Hayek, is named Lola, (coincidentally?) the name of the 1961 film directed by his father Jacques Demy,  which starred Anouk Aimee, who co-starred with Chiara's father Marcello Mastroianni in La Dolce Vita.  And of course, Chiara Mastroianni's mother Catherine Deneuve starred in Jacques Demy's Umbrellas of Cherbourg.
Is this getting you dizzy, too? Well that's the whole point of today's blog entry.
Posted by GODLIS at 3/06/2012 No comments: 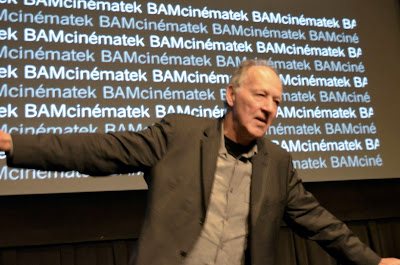 The French have arrived - the annual Rendezvous with French Cinema opened at Lincoln Center this week. And on the very same night over at BAM Cinematek in Brooklyn, Werner Herzog was "in flight" expounding on the eclectic choices of music in his films. I managed to see and shoot both, thanks to the efficient NYC subway system. 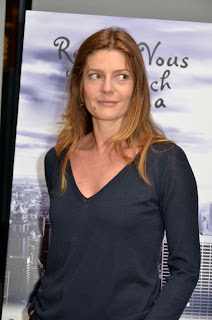 Chiara Mastroianni
First it was the Opening night arrivals at Lincoln Center, which most notably - well, for me at least - included two actresses - Chiara Mastroianni  (daughter of Catherine Deneuve & Marcello Mastroianni), and Carole Bouquet (longtime face of Chanel No.5, whose career stretches from acting as a James Bond girl (For Your Eyes Only)  to working with Luis Bunuel (That Obscure Object of Desire). 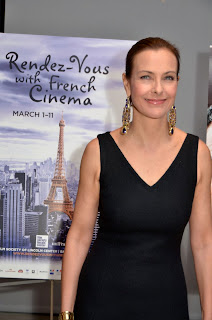 Carole Bouquet
Then it was out to BAM in Brooklyn to see Werner Herzog. Well that in itself would be a pretty legendary night. To hear Herzog talking with Paul Holdengraber (director of Live from NYPL) for over an hour about music, while showing clips from his films, pretty much made my subway ride well worth it. You could see the glint in Herzog's eyes, when asked which clip he wanted to end the night on - he chose the blues harmonica "Dancing Chicken" scene from his 1978 film  Stroszek.
You MUST watch it HERE now!

A fitting ending to a fantastic evening. 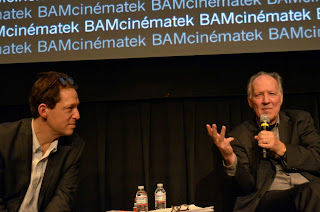 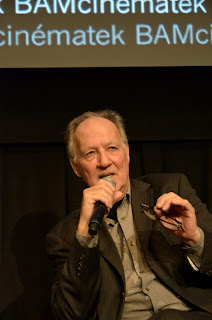 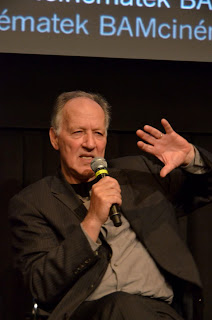