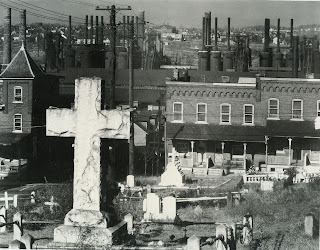 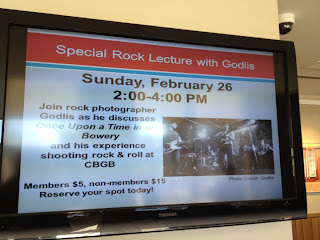 On my way to give a talk about my punk photography yesterday at the Allentown Art Museum's Who Shot Rock exhibition in Pennsylvania, I unexpectedly found myself in the shadow of one of my photographic idols Walker Evans.  In my haste to prepare for my talk,  I had not foreseen that Allentown was only miles away from Bethlehem and Easton PA, locations of some of Walker Evans greatest photographs included in his classic 1938 book American Photographs.  In fact, before I had even arrived at the Allentown Art Museum, I had Eileen stop the car in a town square blocks away, so I could take this photograph. 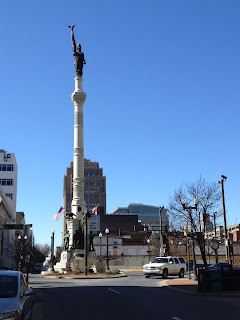 Which upon my return to the city, I realized was similar via memory to this Walker Evans shot. 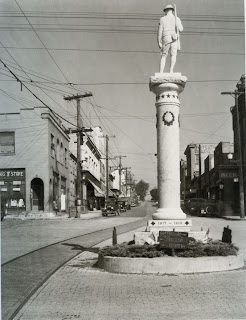 Walker Evans - Main Street Pennsylvania Town, 1936
And so began an adventurous journey into the many layers of my photographic past. The talk went well indeed. From Walker Evans, Robert Frank, Diane Arbus, Weegee & Brassai, to the Bowery in 1976, I speckled the presentation of my CBGB photography - titled Once Upon a Time on the Bowery - with clips from one of my favorite photography films - Blow-Up.  Directed in 1966 by Michelangelo Antonioni, with David Hemmings cast as the "swinging sixties" photographer David Bailey, it was the first film that actually took me into a real darkroom, a real studio, and in fact a real nightclub.  With an early intense performance by Vanessa Redgrave,  and the classic Yardbirds nightclub scene - this was the film that no doubt eventually drew me to purchase my first Pentax Spotmatic and eerily predicted my "brilliant career" in rock photography.
"I'm only doing my job. Some people are bullfighters. Some people are politicians. I'm a photographer."
But back to the Allentown Art Museum,  where the current layout of the Who Shot Rock exhibition,  thoughtfully laid out & more intimate with it's small walls than even the Brooklyn show - lives on. As I said the talk went well. The audience hung in there with my eclectic references that strayed between the history of photography, the history of punk, and the history of me. Thank you. 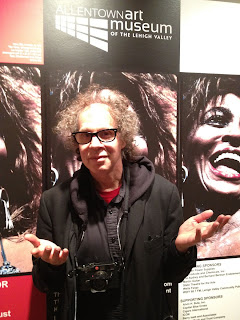 From there it was back on the road, a few photographs of Allentown, and a stop at the - how could I not? - Bethlehem Diner. 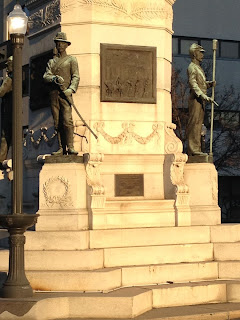 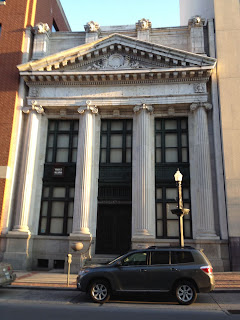 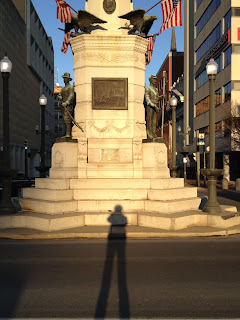 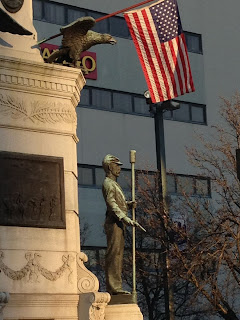 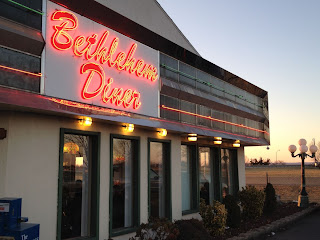 Once Upon a Time on the Bowery - Hank Williams version


OK - a little promotion here for my Photography Slide Lecture (er, amusing talk)  this weekend - Sunday Feb.26th - at the Allentown Art Museum in Allentown PA, which is now hosting the fabulous Who Shot Rock exhibition. I'll be showing a everything but the kitchen sink from CBGB's, to clips from the movie Blow-Up.  Think of it as my "stand-up photography" act.

info at : alllentownartmuseum.org
Posted by GODLIS at 2/23/2012 No comments: 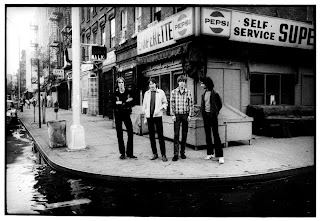 I was calmly drinking down my morning coffee last week, when my friend Tim Broun, whose Stupefaction blog is burning up the internet, alerted me to a blogpost on Flaming Pablum about this photograph I took of the band Television in the East Village in the fall of1977. It seems that there was a photo quiz posted last spring to search out the location of several cool photographs, of which mine was not only one - but one of the only ones that remained unidentified until last week - imagine that! 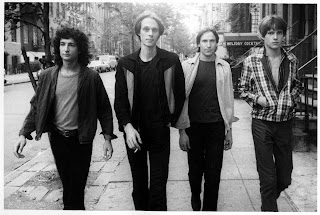 Well this was all news to me when Tim's alert arrived. And it just gets better. It turns out the photo detective who finally figured out my shoot location was none other than Bob Egan of PopSpotsNYC, whose indefatigable archeological investigations into the shot locations of several key Bob Dylan LP cover photos I've been in awe of since I stumbled upon them last year. In fact I've been telling everyone who can bear to listen to my Bob Dylan fanaticism that they have to check these out - Daniel Kramer's shot for Highway 61 Revisited, Sandy Speiser's shot for Another Side AND Jerry Schatzberg's shot for Blonde on Blonde.These are so unbelievably detailed, carefully laid out, and delightful to read, that it shudders me to think that the same Bob Egan went out and conducted an investigation for Flaming Pablum to deconstruct the location of my 1977 Television photograph. 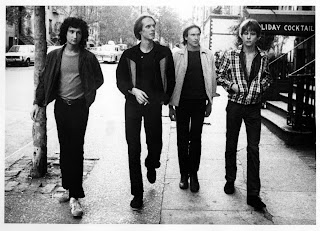 Yes he's right it was First Avenue at 9th Street - we had just walked down St.Marks Place (past the recently extinct Holiday Cocktail Lounge and the ever present Stromboli Pizza) proceeding up First Avenue to 9th street when 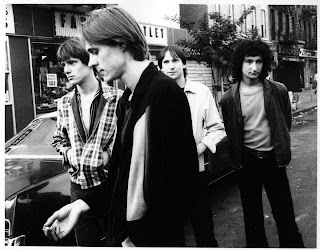 we encountered this puddle overtaking the whole corner. It wasn't raining that fall day in 1977, so I suspect there was a drainage problem on that still somewhat crooked corner. In any case, it looked perfect for a photo, so I asked everyone to wait while I crossed over to the other side to get this view from across the pond (hoping no cars would turn up 9th and knock me over). 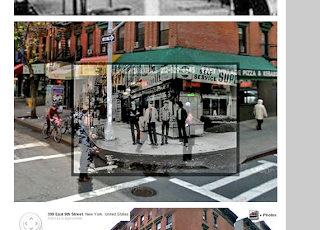 People have asked me quite often over the years about the location of this photo - even people who live in that neighborhood. And I am sometimes stumped myself, because there was still an outdoor fruit and vegetable stand on that corner for many years. And all those quirky little stores - Curtain shops, button shops - are now restaurants. 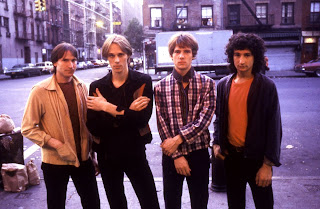 But what really strikes me about Bob Egan's investigations of Bob Dylan cover shots - and it's true of my Television photo as well - is how close to home all those photographs were taken (well not exactly the Blonde on Blonde - though that might be the most fascinating one).  Freewheelin'  was shot on Jones Street , literally around the corner from Dylan's West 4th St. apartment. Another Side just a block away from his record company's offices on 52nd Street, and Bringing it all Back Home on the front steps of his manager's Gramercy Park Townhouse. And indeed, my photograph of Television follows the same pattern. I was living  on St.Marks Place between Second & Third Ave. while Fred Smith - Television's lovable bass player - lived on St.Marks between First and Second Ave. - which is where we all gathered before the shoot. So the distance between meeting point and this shot was two whole blocks. Were we just lazy or was there just a plethora of great locations in that short radius? A little bit of both (we actually continued our walk up to 18th street to finish the session). But indeed, First Avenue looked so medieval in those days. 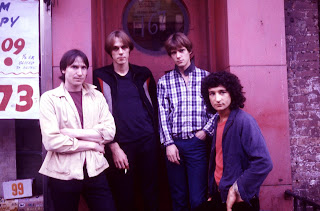 ALL PHOTOS © GODLIS
I am pleased to have stumped Flaming Pablum's readers with my shot location, and honored to have Bob Egan's thorough investigation (referencing a microfiche of the 1977 phone book - brilliant), but I'm most amused with Tim Broun's post in the comment section - "Nice post, but you could have just asked Godlis - he took the photo". Yeah but this is so much more fun!